Imran Firasat has become a hot potato. He has not made it easy for himself. It is dangerous to challenge Islam. Spain and Norway are doing everything they can to get rid of him.

IMRAN FIRASAT, a Pakistani-born ex-Muslim, was given asylum in Spain because of threats to his life for converting to Christianity
Firasat obtained political asylum in Spain in October 2006 because of death threats against him in both Pakistan and Indonesia for leaving the Islamic faith and marrying an Indonesian non-Muslim woman.

From a Norwegian newspaper: avisen Dagen 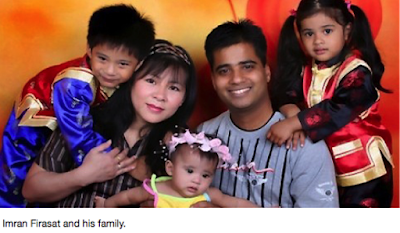 Spanish authorities, however, took measures to deport Firasat in December 2012, after he released a one-hour amateur film entitled, "The Innocent Prophet: The Life of Mohammed from a Different Point of View." The movie, which was posted on YouTube, purports to raise awareness of the dangers of Islam to Western Civilization. (YouTube has issued a warning about this video, and has identified the following content as being potentially offensive or inappropriate. Press Fortsett-Continue)
Shortly after Firasat's film was released, Spanish Foreign Minister José Manuel García-Margallo and Spanish Interior Minister Jorge Fernández Díaz initiated a process to review his refugee status.

It seems as if much is predetermined here. This is similar to fraud and conspiracy, says Samuel Nunberg in the US Mediterranean East Forum. Firasat receive broad international support in the fight against extradition to Pakistan.
- It would have been no case against him if he had criticized Christianity or Judaism, this happens because he criticizes Islam, says the American lawyer Samuel Nunberg in Mediterranean East Forum to day. American supporters believe the case against Imran Firasat sets a frightening precedent in Europe.

A Foreign Ministry document, dated November 27, 2012, stated that "the consequences of the release of a video with such [anti-Islamic] characteristics are highly worrisome and constitute a real risk for Spanish interests because the author of the video identifies himself as a 'Spanish citizen.'"

Fernández issued an order on December 21, 2012 to deport Firasat based on Article 44 of the Law on Asylum and Protection, which allows the state to revoke the refugee status of "persons who constitute a threat to Spanish security." The deportation order stated that Firasat constituted a "persistent source of problems due to his constant threats against the Koran and Islam in general."
Firasat appealed the deportation order at the National Court [Audiencia Nacional], arguing that the expression of his views about Islam fall within the constitutional right to free speech.
But the National Court rejected Firasat's appeal. A ruling dated October 3, 2013 states:
Now the Supreme Court has not only confirmed the National Court's ruling, but it has gone one step farther. Its ruling states:
The right to the freedom of expression does not guarantee the right to intolerant manifestations or expressions that infringe against religious freedom, that have the character of blasphemy or that seek to offend religious convictions and do not contribute to the public debate." 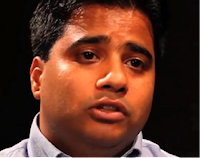 This paragraph is strangely similar to an international blasphemy law being promoted by the Organization of Islamic Cooperation, a bloc of 57 Muslim countries dedicated to implementing a worldwide ban on "negative stereotyping of Islam."
Warning of potential trouble ahead for the exercise of free speech in Spain, two judges—Manuel Campos and Isabella Perelló—dissented from the majority opinion. They signed a statement in which they ask whether the source of the danger to national security is in the actions of Firasat, or in the reactions of Islamic fundamentalists. They write:
"The pernicious effects against national security do not strictly derive from the conduct of the refugee, but rather from the violent reactions of third persons."
Although Firasat can now be deported, the court says he and his family will not be delivered "to a country where there is danger to life or freedom." It remains unclear whether Firasat will appeal the Spanish high court ruling at the European Court of Human Rights (ECHR). The Strasbourg-based ECHR enforces the European Convention on Human Rights and its jurisdiction is compulsory and binding for all 47 member states of the Council of Europe.
In a December 2012 interview with the online newspaper International Business Times [IBT], Firasat said he has received far more threats from the Spanish government than from angry Muslims. He said:
"Seven years ago I was granted refugee status in Spain for the reason that I used to criticize Islam. Since then I have taken the fight against Islam very far. And my right to freedom of expression was always respected by this great country. But now suddenly for doing the same thing which I have been doing for the last seven years, I have been threatened by the authorities [and told] that my refugee status will be revoked. I will be deported back to Pakistan where the death penalty for blasphemy is waiting for me."

Imran Firasat, sought asylum in Norway in 2014.
After Imran surrendered himself in Norway and sought asylum, he was quietly arrested by the Oslo police. 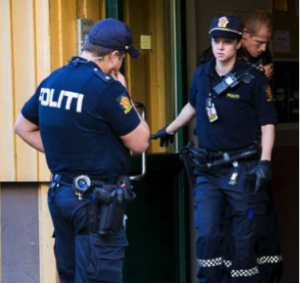 The Norwegian authorities seems to be in a rushed to get rid of him and decided to deport him back to Spain without putting him through the standard protocol of producing him before a judge before the deportation can proceed.

In Norway the Islamist Mullah Krekar have a good life, and being taken care of by his lawyer. This shows the great fear of Islam in Norway and in Europe. To challenge the Islamic states, we have done some experiences in Norway and Denmark with the Muhammad cartoons, so the future of Europe does not look bright.
Imran Firasat, as a Muslim who has converted to Christianity, has no such luck as Mullah Krekar. Imran can get a death penalty in Pakistan and Indonesia. 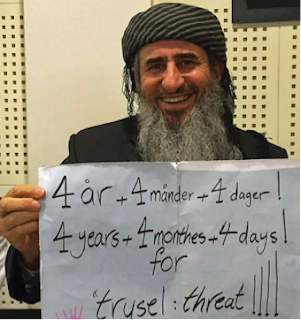 Mullah Krekar is the founding leader of the Al-Qaeda allied Iraqi terrorist group Ansar Al-Sunnah, which has carried out countless terrorist attacks and massacres in Iraq. He is listed as a terrorist by the UN and the US State Department. In 2003, the Norwegian High Court judged him a "danger to national security" (also by the Norway Supreme Court in 2008) and he was ordered to be deported in February 2003. In 2005, Iraqi justice minister also sought his extradition to Iraq to face justice for terrorist activities.
In September 2008, Krekar released a fatwa to kill Mariwan Halabjaee, a Norway based Iraqi Kurdish author, for writing the book, Sex, Sharia and Women in the History of Islam. Also in 2010, he threatened to kill Erna Solberg, currently the Prime Minister of Norway, a threat he repeated in 2012 in case he would be deported from Norway. (read more about Mullah Krekar on Wikipedia)
Despite all these, Norway, for more than a decade, has refused to extradite Mullah Krekar to Iraq, fearing that he may face death penalty for his crimes in Iraq.
Now he has sued the Norwegian state for 200,000 crowns, he claims that the state has destroyed his good name and reputation.